Quantum Physics an overview of a weird world Basics

A primer on the conceptual foundations of Quantum Physics 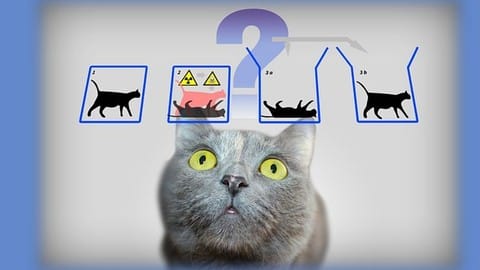 Quantum Physics an overview of a weird world Basics

The conceptual foundations of Quantum Physics.
A comprehensive A-Z guide that will save you a ton of time in searching elsewhere trying to piece all the different information together.
Quantum Theory without falling into oversimplifications or hyped versions and yet conceived for an audience of non-physicists.
The double silt experiment, wave particle duality, entanglement, superposition, uncertainty principle, Schrödinger’s cat, quantum tunneling and much more.
A course that fills the gap between a too popularized version of Quantum Mechanics and too high level university courses.
You will learn all the basics, enabling you to distinguish between mere speculative interpretations in fashion and the real experimental facts.

Some lectures resort to high school math and some calculus.
Example: Pythagorean theorem, square root, exponential, sin/cos functions, Cartesian coordinates, vectors, intuitive concept of a derivative, basic notion of a complex number.
However, no university level required. In case you need a mathematical refresh an appendix will help you to recall some elementary mathematical concepts.
Please take your time. Some concepts need time to be assimilated or may need to be viewed more than once. But at the end you will have a clarity of mind on the subject that you won’t get elsewhere. It’s worth it!
The Udemy course “Physics: from Galileo to Einstein” could be useful (but is not mandatory) to the get in touch with the basic concepts of classical physics and that are used extensively in quantum physics as well.

Note: Take a look at the free lectures! Scroll down to the curriculum and click on ‘Basics I’. The ‘preview’ lectures are free. That might help you to get a better feeling on what’s about.Why this course? This is an introductory course (Basics) that originates from my desire to share my knowledge of the mysterious and fascinating world of Quantum Physics. Considering how the media (sometimes also physicists) present Quantum Theory focusing only on highly dubious ideas and speculations backed by no evidence or, worse, promote pseudo-scientific hypes that fall regularly into and out of fashion, I felt it necessary to create a serious introduction to the conceptual foundations of Quantum Physics. The second part (Supplemental), which focuses further on some selected topics, can be found on the Udemy portal as well.Who is it for? For the autodidact who is looking for a serious and rigorous introduction to the foundations of quantum physics and some of its philosophical implications. This course does not need a technical background except for some basics, such as elementary concepts of algebra, trigonometry, calculus and statistics. It is easier than a university course but needs more effort than a popular science lecture. It might be easier for those having already some math background but a mathematical appendix is furnished for those who need a reminder.Even though these lectures are not a replacement for college courses they could complement it. University or college classes do not address the foundations and the philosophical aspects of Quantum Physics, teaching Quantum Mechanics mostly from the formal and mathematical perspective, which is something we will restrict only to the essential basics here. While in schools, colleges and universities, Quantum Physics is taught with a dry and almost exclusively technical approach which furnishes only a superficial insight on its foundations, this course is recommended also to high school, undergraduate and graduate students who would like to look further. Not only physicists could (re-)discover some topics but philosophers, engineers, IT students or historians of science could acquire with this course a basic preparation which is unlikely to be offered in most departments. This online course proposes itself also to become part of a faculty curriculum in departments or other institutions which would like to expand their interests towards the foundations of Quantum Physics (contact the instructor for details).What is it about? A course on the conceptual foundations of Quantum Physics on topics that you won’t find elsewhere explained at introductory level. It will lead you by hand as clearly as possible from the abc of Quantum Mechanics to the most recent experiments and its implications.We review the standard concepts like the wave-particle duality, Heisenberg`s uncertainty principle, Schrödinger`s cat, the vacuum zero-point energy and virtual particles, among several others. Then we deepen the subject analysing quantum entanglement, the so called “EPR paradox” which question our naive understanding of the meaning of reality and locality (for more details on the content look up the curriculum page).My aim is to deliver the material necessary so that you will be able by yourself to distinguish between mere speculative (and more or less extravagant) interpretations in fashion, and the real Quantum Theory and its experimental facts as it is.

Lecture 1 Introduction to the course

Section 1: Basics I – The birth and foundations of quantum mechanics

Lecture 2 The Nature of Light

Lecture 15 The wavefunction and the measurement problem

Lecture 16 The state vector, observables and the measurement postulate

Section 2: Basics II – Mysteries and paradoxes of the quantum world

Lecture 23 The spinning world of spinors

Lecture 25 The photon’s polarization and spin

Lecture 26 Quantum superposition: being in two states at the same time

Lecture 43 Appendix – Part III : more on waves and some calculus

Everyone who is passionate about science and/or philosophy of science and is curious about the laws and the nature of the material universe.,Undergraduates of physics who could profit from deepening first the conceptual foundations of quantum physics and which will better prepare them to deal with the meaning of the more abstract mathematical formalism they will encounter in their college courses.,The course is well suited for all those non-physics university students who do not have sufficient mathematical background to go through a high-level QM course, but would like to assimilate the basics of quantum physics for the purpose of additional research. For instance philosophers, historians of science, IT students, engineers.

You Can See More Courses in the Teaching & Academics >> Greetings from CourseDown.com