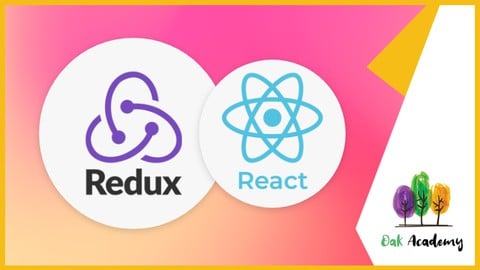 If you want to to learn Redux with React, React Router and React Portals, you are in the right place
If you want to learn today’s most popular frontend architectures, do not wait. This redux with react course is for you!
Learn the most popular React Router, React-Portal and Redux libraries used with React JS
Learn how to create multi-page web applications with Redux, React-Router
Learn the easy and safe way to create modals with React Portals
Learn how to manage the data of our application with the Redux library
Learn how to easily access the data we hold globally from our components with React JS
Learn how to manipulate the data stored in the Redux with modern react js store by creating actions
This course is ideal for people who have a basic knowledge of HTML, CSS, JavaScript and React JS
React is an essential Javascript framework for web development. It is the most popular framework for developing web, mobile, and desktop app user interfaces.
React is a frontend library in Javascript that was developed by Facebook.
React is an open-source JavaScript frontend library. Some developers consider it a frontend framework because it does more than standard libraries usually do.
The most common use of React is to build dynamic user interfaces for single-page web applications.
React encourages engineers to write code using a Functional Programming approach. Engineers create components, which are normal Javascript functions.
Frameworks provide an opinionated approach to building an entire application. Libraries, on the other hand, assist in building a single aspect of an application
React is worth learning. There are a couple of reasons. The first one is that React is in high demand in the software development job market and has been for a
Every technology or programming language has a learning curve, and React is no different.
it is easy to learn if you are dedicated and determined to create frontend web applications.
What is the difference between React Native and React JS, and which one should I learn?
React, or React JS, is a front-end Javascript library for building UI components for the web.
React Native is still React, which means the syntax and workflow for building applications are basically the same, but the generated components are different.
In React, web components are generated. In React Native, the generated components interact with a phone’s native APIs.
If your focus is web development, then you should learn React
If you want to build mobile applications, it is best to learn React first and become familiar with the technology before you try React Native.
Why is React so popular? There are many reasons why React is popular. One reason is that Facebook developed it.
The world of web development is as wide as the internet itself.
Much of our social and vocational lives play out on the internet, which prompts new industries aimed at creating, managing, and debugging the websites

Lecture 1 What You Will Learn in This Redux with React Course?

You Can See More Courses in the Developer >> Greetings from CourseDown.com